One of Jimani's regular job shop engraving customers showed up today with a problem. He had 2 bottles of expensive whiskey meant as gifts to his boss. The bottles had a laser engraved design on them. We didn't know where they came from. Well, he apparently dropped one of the bottles. It broke and he was reluctant to tell his boss so he decided to just buy a new bottle to replace the broken one. The new bottle that he bought did not have the laser engraved logo on the back. He came over and asked if we could help him out. He had found some artwork on the Internet that was close to the logo on the bottle. We modified the art and marked the bottle on our CO2. Our engraving is on the right and the original is on the left. We don’t think that his boss will know the difference.

Please click here to see all of the other laser marking applications. 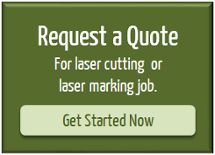